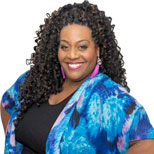 Known for her quick wit, outrageous presenting style, and big heart, nobody gets a better interview than Alison Hammond. Her unforgettable charm and sense of fun rate her number one with celebrities too: she’s tap- danced with Renée Zellweger, rapped with Will Smith, jammed with Russell Crowe, and been serenaded by Hugh Jackman...to name just a few.

After appearing as a regular face on ITV’s This Morning, Alison’s larger than life personality has taken Britain by storm and she is now a favourite of thousands of viewers across the nation. Alison became an audience favourite in 2014’s Strictly Come dancing due to her beaming smile, infectious laugh and fun-loving partnership with Aljaz which lead to her taking part in the Strictly Come Dancing Live Tour and this year’s Christmas Special.

Other TV credits include her rise to fame in Channel 4’s ‘Big Brother’ where she first won the hearts of the British public. She then went on to appear on ‘I’m a Celebrity... Get Me Out of Here’ where she was a contestant in 2010. She has also appeared as a panellist on ‘Loose Women’ and has presented a number of shows including ‘Inside Out’, ‘BBC Exchange’, and ‘Turn on Terry’. Alison is also an accomplished actress having appeared in various TV dramas, notably ‘Boon’, ‘Chalkface’, ‘Doctors’, ‘Locksmith’, ‘Yes’, and 3 series of the BAFTA award- winning ‘Palace Hill’.